How to downgrade to the "good" version (before this silly UI update)?

Can this be done on Android? What are the steps?

I know there is some info at How to downgrade to an earlier version? but I can’t side load so how can it be done?

Do the settings export to the file.
Then remove current version.
Download K-9 app in previous version and istall it.
Import previously exported settings.

And you are right - new UI is useless.

Details you can find here:
https://forum.k9mail.app/t/how-to-downgrade-to-an-earlier-version/1432/5

@Marcin thanks for the link, but for some reason it doesn’t work for me. I keep getting an error message ‘App not installed’ with the old apk(s), no matter what I try.

Suggestions on what is happening here…?

PS uninstalled the 5.800 version first, disabled Play Protect & auto updates, even signed the apk, etc. But only the new version will install (also the apk, outside Google Play).

PS2 I use a Samsung Galaxy Z Fold 2 with loads of memory available.

Yes, I downloaded 5.600 and several later beta versions, all with the same outcome. Only the 5.800 version seems to install

There are steps described for switching to that version. If needed ou can try to translate via Google Translator or DeepL-Translator.

You need to uninstall completely v5.800 (after exporting settings) before then trying to reinstall 5.6.

(I took a copy of the 5.6 apk using an apk extractor before upgrading to 5.8)

5.6 still has the new UI code in it I think. I’ve just spent the last few hours trying to get back to the “old days”. I went back to release 5.401 and it works just fine. I was able to import my settings after I got the auto-update horror show UI. Exported settings, uninstalled K9, rebooted Android Pixel 4a, turned off auto-update on the phone completely, installed from this link ttps://github.com/k9mail/k-9/releases/tag/5.401, imported settings and had to confirm some certificates and I was back to normal. LOVE LOVE LOVE K-9 but that latest update was a disaster from a UI perspective.

I have just installed ‘Open Mail’ which is a fork of K9 and the same as it used to be.

Export your current settings fromm k9 and import them in to Open Mail. Rejoice.

Everything is perfectly described in one of the downgrade posts.

THANK YOU @jimimaseye!!
Finally a build that actually installs. It’s old, and wasn’t updated since 2018… But at least it works. Took me an hour or so to get things working and tested. Done!

Hoping the devs read this and care about the users. I’m sure a lot of work went into this ui, but did you better test it out or get some solid unbiased opinions?

This new ui makes it harder to read and delete email.

What is K9 supposed to do? Ugh.
Please give us the choice

If you want the actual k9 v5.600 (and without risk of overwriting by google play):

How to downgrade to an earlier version? Frequently Asked Questions

Android does not support downgrading an app. So you have to uninstall the app, then install the old versions you want to continue using. Before doing that, you probably want to export your settings, though. Export K-9 Mail settings Open the drawer Select Settings Select Export settings Tap the Export button Select a destination and tap the Save button Disable auto update in Google Play Open the Play Store app Go to the details page of K-9 Mail Open the “three dots” menu in the upper rig…

Use the F-droid route - you won’t have to worry about google play as it will be seen as a 3rd party install.

.
On simple but important function for me was that I could see with one click all unread mails, which isn’t possible now

I won’t argue about the rationality and necessity of these UI changes, but it is an utter nonsense to me as well.

Mostly I only use K-9 mail to read my new messages (they are downloaded to my desktop computer as well and deleted from the POP3 server after a month). The only function/button I need the one that opens the next just arrived message easily after reading the previous.

There is no side-swiping for some reason to reach the previous/next message in the reading pane, I already bowed to not having that, so I’m stuck with the arrow button(s). And the previously easy-to-reach Next button is now between other buttons at the top, AND at the two-third of the upper toolbar horizontally. Each time I have to carefully locate my only button as a sniper targeting before pushing it. WTF?

Since as I see there are people who need the Delete button rather than the arrows, there might be no other solution than making these buttons configurable (there are highly configurable mail clients)… Also there can be floating buttons, or similar tricks may work.

There is no side-swiping for some reason to reach the previous/next message in the reading pane, I already bowed to not having that

Swiping is planned in the future

It’s just currently hard to implement with the current code structure of that part of the app.

Thank you for the kind reply.

For those looking for a proper download-link of the k9mail apk; The right (old) UI version is here; 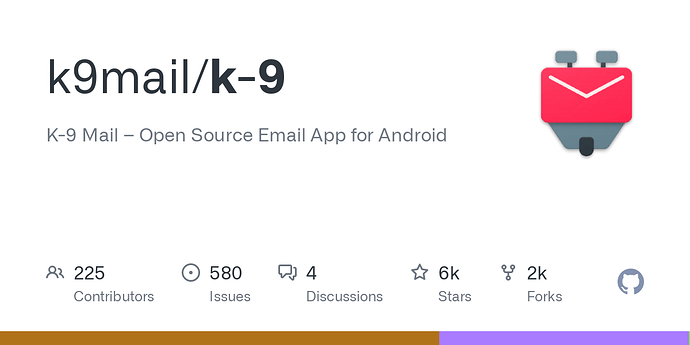 Now all we need is someone to fork this UI, and implement all the back-end updates to bring it up to date. Amazed how this lead developer could not even realize it might be a better idea not to entirely change k9’s main selling point, the multi-account UI, the good positioning of buttons, the long-time user input behind its look. The app is 14 years old or something. Sorry to have to write this, but what a complete and utter foolish act.

I won’t speak to the original decisions, reasoning, impacts, etc. (a lot has been said already) but I see a few posts up that swiping will return, and read elsewhere that cketti is looking at ways to bring back the account overview page. Don’t recall seeing anything about the button bar placement, but who knows.

I will personally put up with the extra taps and finger-stretching for a while, on the hope (and perhaps expectation) that better things are on the way.

and see what they come up with in the coming days or weeks. I feel like the voices have been heard, now, and ‘our’ free app will improve… but they need the time to be able to do that…

I don’t know, it’s quite a stretch to just push a total overhaul of a change without a ‘return’ or ‘back to classic’ option. Plus, the name “k-9 mail” was never really liked by its originator (obra (Jesse Vincent) · GitHub) in the beginning because, as he wrote “I don’t like dogs”, he even wrote “it should look exactly like this, because none of the other android mail apps do”, underwriting the obvious niche it was for. You can find it all in k9’s history on github issues. Jesse clearly did most of the work on k9, and we had him to thank for the multi-account view as well.