I am very disappointed and even angry by the update of K-9 without my knowledge!
Twice, I have to look for an old version and reset my email settings because the Play-store manipulation didn’t work.
Moreover, I am strongly annoyed by the ergonomics of this version, even if I know that an adaptation requires a little time: I did not ask anything!
I’m waiting to find another mail client that suits me and I’ll change.
I find that the creators of applications take too much freedom with the “users”.
Free software doesn’t give all the rights to the one who proposes it and to take back what is given is theft!
An update(?!) is a theft from a previous donation.

Good luck and have fun trying to find better e-mail client for Android (one does not exist). If you want to use older version maybe get apk from GitHub and install it manually?

I can understand people being upset.

But to say that updated code for open source software is theft is one of the most ridiculous things I’ve read for a while. All the code is still available for the old version, you can do with it whatever you want.

Taking money to work full time on a project and then completely ignore users when making updates is absolutely theft.

You can check out FairEmail. It’s not a perfect replacement to k-9 as we loved it but is fairly close and is still an open source project. Out of the box it’s not great but it is highly configurable.

Out of interest, what evidence do you have that the majority of users are unhappy with the recent updates?

Exactly - happy users don’t usually post in a forum saying they’re happy, but everybody with the tinyest issue will which makes it look like everybody hates the changes.

K-9 is still THE best email client and the only one I tried that notifies of new mails when it’s supposed to. FairEmail for example ALWAYS moved icon request emails sent BY ME to various icon pack devs into MY OWN Spam folder and the dev blamed MY setup even though that never happened with any other client.

So yea, I’m very happy with K-9 and don’t plan on switching

What evidence do you have the majority are happy?

Look around, the feedback on every possible platform is almost unanimously against the new UI. And the examples of the maintainer dismissing said feedback starting from the very beginning 6 years ago are endless.

It sure is convenient to tell the unhappy users to go away, force an update on a platform that doesn’t allow downgrading and then claim users aren’t unhappy.

Considering I’ve never seen that behavior with fair email, nor anyone I’ve recommended it to, I’m going to say that is likely as issue with your setup.

Don’t blame the dev for something that is your own fault.

I for one like the new UI a lot. Give yourself some time to get used to it; you may grow to like it too.

Also, you probably did “ask” for the the change by leaving auto-update enabled in the Play store. If you don’t want developers to push out updates, fixes and (in the developers’ view) improvements, without your consent, turn off auto-update.

So really you have no evidence at all. A few unhappy users are making a lot of noise, but you have no idea at all what proportion of users are happy or otherwise with the app. And as Nimueh pointed out, happy users rarely invest a lot of energy posting comments about how great a product is.

So when you say they are completely ignoring users, what you actually mean is that they aren’t doing exactly what you want them to. And you leaving negative comments in every other thread, and constantly suggesting users use an alternative is frankly a bit tiresome.

I’m also happy with the app by the way, it obviously has a few wrinkles but it was well past needing a redesign to bring it up to date. The new version everything I need it to do.

The new UI isn’t just a visual change. It is a massive departure in functionality and workflow. It is literally unusable from an accessibility perspective.

Google basically forces auto updates. Your argument is a terrible one.

The evidence is in the near unanimous feedback. You are objectively wrong when you say a few are unhappy. Thousands have voiced their feedback against the new UI and your logic about feedback goes the other way as well. Majority of unhappy users also don’t provide feedback, they just move on.

The evidence is in the direct examples of dismissing user feedback by the developer. The google play numbers suggest at least 17% of users prefer the old UI but that number is biased as the platform is auto updating and does not allow downgrading. The users were not warned and had no idea workflow breaking regressions were coming. (Not to mention the developer actively dismisses users feedback and tells them to go away which subtracts from that number) On github this very scenario was warned about and the task was asked of the maintainer to find out what the users wanted. The response of the maintainer was to ban that person suggesting those things and actively dismiss all discussion around such things.

The maintainers anti user stance has been clarified and voiced by himself on these forums and in blogs. On IRC he admits to ignoring user feedback.

Like I said, actively telling users to go away and then claiming user’s aren’t unhappy results in false numbers. They just aren’t here anymore to voice their complaint.

You are objectively wrong.

@Bun-Bun: What’s your plan? Annoy forum users until the ones who don’t share your enthusiasm for negativity all leave and you’re right that every (remaining) forum user hates the app? Then what?

Google basically forces auto updates. Your argument is a terrible one.

We get it, you don’t like the app (any more) and so do a few dozen or maybe few 100 others. But please stop spreading falsehoods like this one.

Why not simply move on - not like your pouting will change anything. 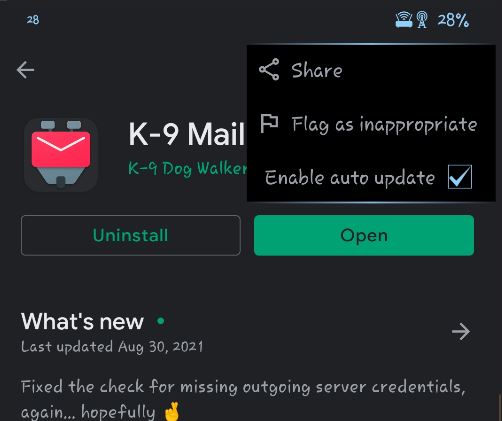 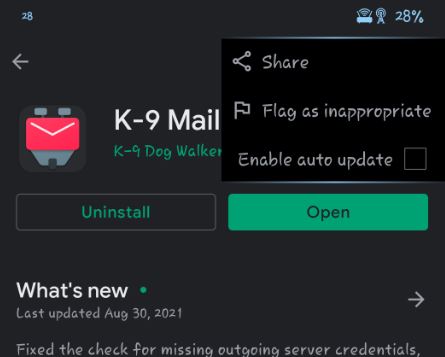 My plan is to continue to provide feedback against poor UX design while informing would be supporters of your project of how you handle yourself so they can make more informed decisions.

I’ve already been contacted by several people outside of these forums requesting more information and evidence: when provided with said evidence, those individuals have agreed with me and made the active decision to go elsewhere and not support you.

Which is already in contradiction to your claim of only a “few” are unhappy.

And then you get notified constantly that updates are disabled if done globally and at the app level you would have needed to do that before the updates were pushed live. After which it is already too late as downgrading on android is difficult to impossible depending on the device and that level of backups are only possible with root.

Google basically forcing auto updates through actively discouraging turning them off is not a falsehood.

So the only measure available that captures the whole user base suggests that around 80% of users prefer the new UI, but I’m the one that’s objectively wrong…

Like I said, that number is biased based on the platform that is auto updating and doesn’t allow downgrading (and doesn’t capture power user numbers).

Even if 17% was accurate, 17% of half a million users is objectively/absurdly more than a “few”.

So yes, you are objectively wrong.