Possibility to test Push for the NEW k9?

For me the “old” k9 has been working reliably on several devices with current roms, right now on my OP 7 with OOS 10 and Samsung Tablet A running BlissRom 10.

In the github for the new version it was said that Push was removed because it doesn’t work on newer devices/roms - for me k9 has always been the ONLY mail app where it worked reliably on new roms, and from what I’ve read in the comments there other users had the same experience.

Since the “old” k9 has a slightly, well “dated” look I’d love to switch to the new one, but without Push that’s out of the question. Setting Poll to 15 minutes would use more battery and still not give instant results.

Isn’t there any way for us to provide logs or do some kind of other tests to help get Push implemented again? Or hell, even just add the option (with a “disclaimer” saying it might not work) so that everybody could test it?

Thanks in advance fingers crossed

old K9 versions used a compatibility mode in Android (targetSdkVersion). This causes a message every time the app is installed/updated: 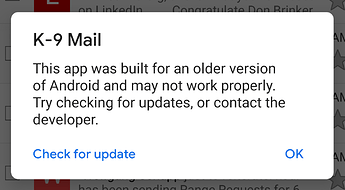 Additionally, Google does no longer allow to upload apps/updates with that compatibility mode.

For the new design, the compatibility mode was switched off (targetSdkVersion = Android 9). Because of this, Android now kills the background service that is required for push to work. The option can therefore not simply be re-enabled and needs more development time. Re-implementing push is on the roadmap but it needs more time.

Well Push works (mostly) in other clients like Fairemail, and not at all in for example the Gmail app.
Some apps circumvent the killing of the background service by having a constant notification shown (that can still be hid) and that works really well.
Maybe that’s an option the k9 team could explore? I sure hope so, I love the look of the new version and the reliability of the old and can’t wait until they’re “merged” and I can use the new version

This will probably be part of the solution, yeah

Most of K-9 Mail is currently developed by one single person. K-9 makes great progress but some things just need more time (or more developers).

Your push settings are still stored in the K-9 database, so they will be restored automatically as soon as the feature is re-implemented.

Well you’re all doing a great job and I’ll be waiting for the new & improved k9 … I tried a bunch of email apps in the last few months but none are as good as the (old) k9, most have a huge delay when notifying about new emails and 1 of them keeps putting emails into MY spam folder that were sent BY ME

Keep up the good work - if you ever need testers just let me know, I’d be happy to help

Thanks for being eager to test Push with K-9 Mail. However, it might still be a while before that is possible.

The old Push code has been removed from K-9 Mail. Even if it was still there, it wouldn’t be running in the compatibility mode K-9 Mail 5.600 is running in on modern Android versions. So the behavior wouldn’t be the same.

Adding back support for Push is the next feature on my list. It will probably be a longer process that involves multiple beta releases to make sure it works reasonably well on a lot of devices. We’re of course hoping that a lot of people will test these beta versions once available and report any issues they encounter.

There are a couple of bugs in recent beta versions that I’ll have to deal with first, though.

I’m happy to hear that Push is indeed on, and from the sound of it pretty high up on, your list.

Thanks for your replies @cketti + @ByteHamster … now I know that there’s hope and will patiently await the test versions with the new Push.

Have a great weekend both of you

How is this going?

If it’s not possible in the near term, how about allowing a smaller polling frequency to be configured, eg. 5 minutes? The shortest currently available is 15 minutes.

The 15 minute frequency is a limitation of the Android system. K-9 cannot go lower.

I think that’s not quite true. By using FairEmail on Android you can set a poll-frequency of 11 minutes.

Android’s WorkManager (which is used by K-9) only supports 15 minutes. Maybe FairEmail starts a persistent background service that then executes the actual sync every 11 minutes (I have not looked at their source code, so I might be wrong). The advantage of WorkManager is that the Android system can schedule the jobs so that the jobs of multiple apps are executed together and therefore need less battery.

That’s right. FairEmail sets a permanent notification for preventing the app from going into doze mode. This is by far the best email app for Android if you have the need for being immediately notified for new email. And from there it polls with a minimum of 11 minutes all folders that the user had excluded from push.

The battery usage is excellent, the app never sucks the battery.