The K9 app on my Samsung Galaxy Fold 4 just updated to 6.502 and the inbox widget disappeared from my homescreen and it’s no longer available to add back from the list of widgets - only the K9 Accounts icon is available now. I see there were some updates in 6.501 to address widget problems in Android 12 and before, but my phone is running Android 13 with OneUI 5.0 and is fully up to date. Any suggestions to get the unified inbox widget back?

You must have been on a very old version… If I am not mistaken, the widget has been gone for a while.

I think it was v 6.501 before as I let all my apps auto-update. My wife still has the unified inbox widget on her Pixel 7 and she’s on 6.502 and her phone is fully up to date (screenshot included). Maybe it’s a bug on Samsung phones and not Google phones? 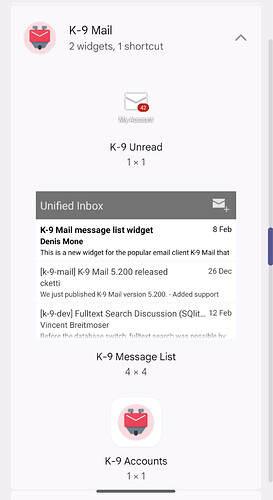 Interesting! Here’s all I’m seeing now on my Fold 4. It was working just fine over the weekend, so I’m not sure what caused it to go away as there weren’t any OS updates or anything else I can think of that changed. 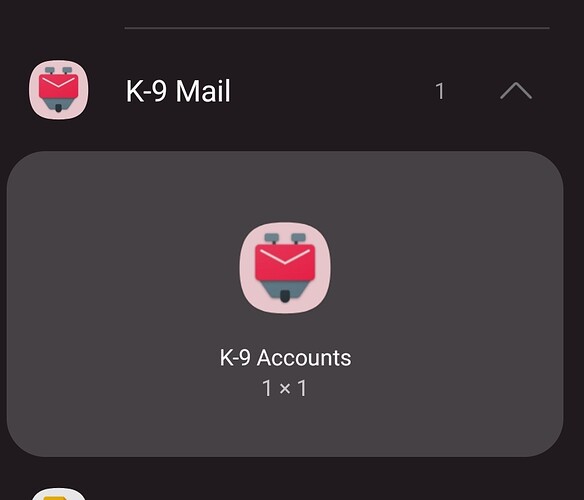 Last time the widgets did not show up for me I had moved the app from internal to external storage. But then all widgets were gone for the app, not only some…

Thanks for the replies, everyone!

I just restarted and no change. I just also tried uninstalling and reinstalling the K9 app and no help with that either, darn it. The app works fine - just no more widget for the inbox. I used to have that widget on my main homescreen to monitor incoming emails, so without it the app is kind of useless to me. The phone already has the Samsung email app built-in and it works just as well - I was mainly using K9 as it’s widget was better than Samsung’s default inbox widget.

@cketti - do you have an idea if a debug log would help here to identify the issue?
(Sorry for pinging you directly - but might an issue with the latest Beta?)

It sounds like the Android version built by Samsung hasn’t picked up the fix that went into Android 12.

@btrayn1: You should report this as a bug to Samsung. Pointing them at this pull request should provide enough information for their engineers.