rolled back to 5.916, the two functions are normal.

Normally such phenomenons are caused by slight incompatibilities between the mail program and the server => are you using IMAP? (POP3 really isn’t up to today’s use cases) and which mail Provider are you using?

have used this app for quite a while. the 5.916 and earlier versions work well with the same server, using the same configurations. so it should not be the ‘server’ problem.

I have checked differences between tagged versions 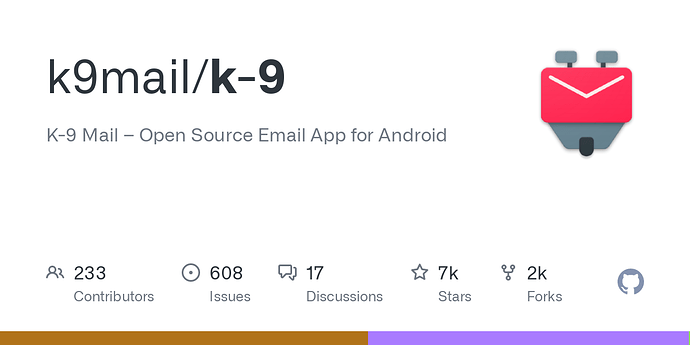 Seems only to be changes in version and changelog - no functional code changes I can spot.

My guess is that K9 in the new version will have fixed a few bugs in the IMAP code - and either your server requires the bigs to be present (with mail server’s that happens a lot) or the fix broke a fringe case your mail server needs => you might be experiencing a new bug in K9. But chances are high that we need to find out how tofind a server that allows to reproduce the problem before it can be fixed.

Like @stphn mentioned, there are no functional changes between the last beta version 5.916 and the stable release 6.000. If K-9 Mail 6.000 can behave strangely, so can K-9 Mail 5.916. By downgrading you might have prevented the bug from being triggered. But it’s certainly still there.

If you encounter this behavior again, please record a debug log and create an issue in our bug tracker. See LoggingErrors · k9mail/k-9 Wiki · GitHub

so it is not the server problem. this does not belong to any functional changes, but more likely due to some subtle, or minor, difference of coding between these versions.

I am admin for a mathematics program, not a Mail one - but that program’s GUI talks to the backend (which does the actual mathematics) through a local network and caused weeks of debugging once when the compiler of the front-end got slightly more efficient and caused the program to get faster than the server. Turned out that the function that flushes buffers on the server (aka the ba lend that does the actual mathematics) was never tested for that use case.
What I have learned from that is that eben slight and totally unrelated changes can cause weird errors to manifest as soon as a network is involved. (In my case the order of the letters in strings was sometimes altered, which breaks any communication)

Here only debug logs taken from 6.000 when you run into that issue can help to identify the bug