Developer: Advice on IDE setup for working on Issues

I am a developer, fluent in Java development, but a beginner in Android development. I would like to start developing some potential changes to the K9 code, that I would submit as a potential Pull Request.

I have done the basics already: I created my own fork of the K9 GitHub repo, set up Android Studio and imported the K9 app, and I can build and run it on the emulator.

I want to try to develop solutions for (e.g.) Issues #5466 and #5467, which obviously requires modifications to the fragments in the Navigation Drawer (see screenshots below). – But it seems those fragments are not pre-created layouts in the IDE but instead they seem to be created dynamically on the fly (??). => So can one of the developers kindly give me some clues about where these fragments are built (visually / xml) and coded (functionally / java)? Apologies for asking such a question, but K9 seems to be a historical hybrid of Java code and Kotlin, so it is quite difficult for me as a newcomer to navigate around the codebase.

List of all unread messages no longer available in 5.8

In the new design, the number of unread messages in an account is displayed next… to its name in the account list. However, tapping the number does not bring up the list (virtual folder?) of all unread messages, but switches to the folder view. This is very inconvenient when using, for example, server-side rules to sort mails into non-inbox folders. Or when using read/unread status to keep track of emails.

Number and list of starred messages no longer accessible

Cketti is currently thinking about how to bring back the account overview screen. There was a post somewhere with more details but because there are a few users who just keep posting the same text again and again, the forum is really cluttered and I cannot find it anymore. I think it might be better to wait a bit before doing things with the side bar.

Thanks for the response.

wait a bit before doing things with the side bar

In the meantime I figured it out myself. The code is actually in K9Drawer.kt in which and I already made some changes to show a mock up of the UI; as you can see in the screen shot and the code snippets below.

NOTE: that this is only the front end so far, and I still need to implement the back end functionality to fetch the starred message count from the mail server. 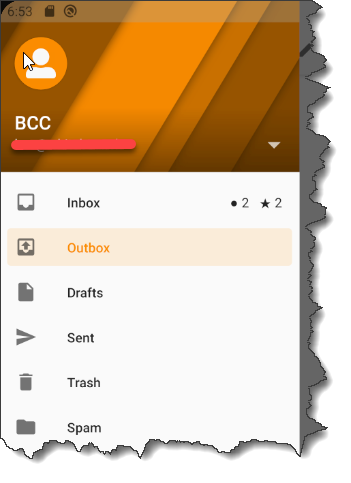 cketti is pinged a lot here recently with many people stating exactly the same as the message that is just above it. I don’t think he currently monitors the pings. If you want to propose code, you should rather create a pull request on GitHub.

Ok. I will create a PR. But it is only partial code, so definitely not ready to merge – yet.